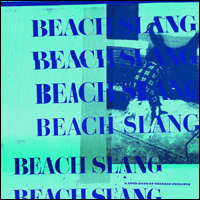 Beach Slang’s sophomore album, A Loud Bash of Teenage Feelings is a more than worthy follow up to their debut record, The Things We Do To Find People Who Feel Like Us, an album critics and fans alike were quick to embrace. Beach Slang’s knack for writing “honest” tracks, with rattling guitars, crashing drums, and erratic enthusiasm carries over nicely here. The tracks on Loud Bash capture the duality of youth and nostalgia. A 14-year-old can come to the record and see themselves as they are now, while a 40-year-old can see how they were then. The themes of loneliness, discovery, and uncertainty speak to the generation experiencing them in the now, as well as anyone who ever has. Singer James Alex manages to recreate the teenage experience without moralizing, belittling, or coming off disingenuous.